This is an optional request flow that you can implement if your Messenger App requires configuration before displaying it to an end user. You can implement the configure-flow by simply specifying a configure_url when setting up your app within Developer Hub. Then, an HTTP POST will be made to that URL when a teammate selects your app.

This request allows you to respond with an updated canvas which the teammate can interact with to help construct the app. Or, you can return a result object containing card creation options which indicates the configuration is now complete.

Once a result object is sent, the collected information will be posted to the initialize-url URL. 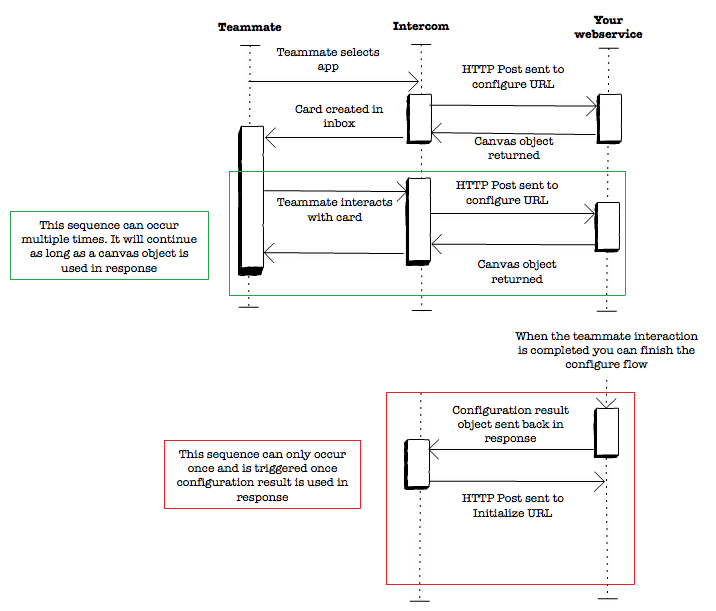 Teammates can add a card instance of your Messenger App to conversations, to the homescreen, to a Message or to Operator flows. When they do, the framework sends a HTTP POST to your webservice via the initialize_url you provided. This asks you what the initial canvas for your new card should look like.

If you have implemented the configure flow then a teammate will have entered some configuration options. These are known as card creation options.

We gather those card creation options from the teammate, and send them to you as part of the payload of the initialize-card request. You return back a canvas containing the initial UI for the new card.

What if I have no configure flow?

Remember, the configure flow is optional, so if you haven't specified a configure_url then the framework will just start with the initialize flow when the teammate adds the app to the conversati. 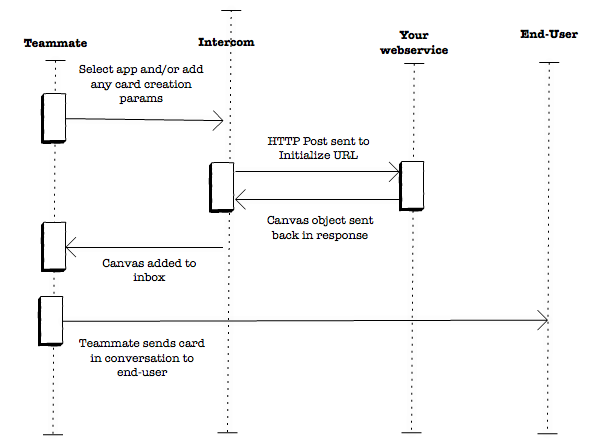 When an end user clicks a button or submits text to an input field on a card, the framework fires a HTTP POST to the submit_url you have provided. The purpose of this request is to tell you a user took an action on the card, and ask how it should be updated.

This request also gives you a chance to trigger any actions you want in your own code, like adding a user's email to your own database or scheduling a calendar event.

The payload contains information about the end user: the action they took, what values they had filled into each input field, and the card's current canvas. In the response, you return back a new canvas object, containing the updated UI for the card.

App completion events will help you understand how your customers are using your app and will add more value to it, making it possible for bots to know when to continue with their flows.

You can optionally add an event object to your submit flow response to tell us if your Messenger app has completed its purpose. For example, an email collector app completes when the end-user submits their email address. 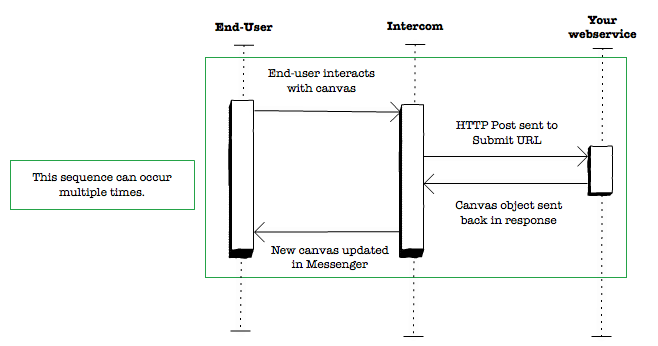 The live canvas is an optional extension of the canvas object which enables developers to provide up-to-date information in a card.

It can be implemented by simply returning a content_url in a canvas object.

Whenever the card containing that canvas object is rendered in the Messenger, a POST request will be sent to that content URL.

This enables a developer to provide a live (rather than the regular static) version of a canvas.

Note that no user interaction is required for the POST request to be triggered. It will occur whenever the card is viewed in a conversation. The live canvas can also be rendered in a teammate inbox.

Why would I need a live canvas?

You can usually realize similar functionality to a live canvas by requiring a user interaction.

Think of a webinar booking app as an example scenario. You may have a button a user can click on to show them the availability and times for the next webinar.

However, in some cases this is not ideal. If you had an app that showed the current health status of your product or platform for example.

Ideally, you would like this to show the current state without requiring a user to manually trigger a status refresh. You would use a live canvas to do this.

As a result, whenever a user opens up their conversation with the health status card they will always get the latest state (which is hopefully green), and they will not need to instigate any action to do so. 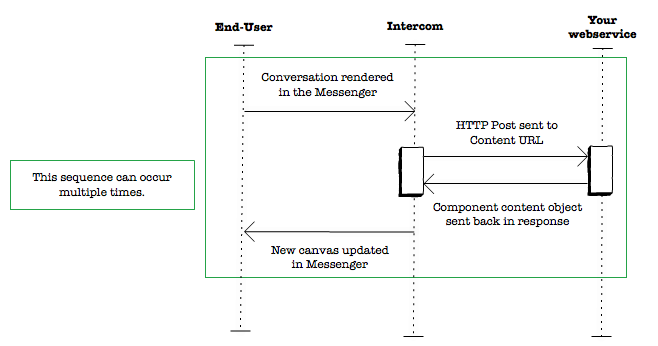 Objects in the Live Canvas Flow

Please see the canvas object for more details on how to implement this flow and the expected response from your webservice.

Updated about 2 months ago